Brazil’s Landless Workers Movement, Movimento dos Trabalhadores Rurais Sem Terra (MST) has started a national school named after Florestan Fernandes who was leader and intellectual of working class in Brazil and movements across south America. Paulo, one of the Political coordinators of the School explained more about the MST school. “MST school is the national school for its cadres. There are centers at provincial levels in Brazil. MST school in Sao Paulo has the required essential facilities, and there are plans to have schools in other places too. They have schools in Brasilia, Ciarea, Para (Near Amazon). Currently there are 30 formation Schools for MST.” 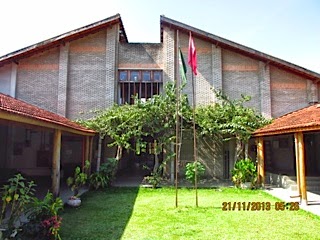 In 1996, the MST decided to build the school and took three years to establish it. Many well-known personalities have understood the significance of this Movement and support it.
Sebastian Salgado, the world famous photographer who made stunning photographs of MST’s fights and people’s life and gave the rights of his publications to MST as a source of revenue to build the school.
Chico Buaque, a very popular singer of Brazil also gave the rights of his songs to MST.
Jose Saramago, a noted writer also gave his rights of his books to MST to build their school.
The school was constructed with hard work of the brigades who came from all over Brazil. Architects and engineers have volunteered and designed the school and helped in the construction, with the school being inaugurated in 2005. The school has a good library stocked with books on different subjects and nice class rooms, meeting halls, well-maintained hostels and residential buildings, kitchens and dining halls. There is also a computer room with internet connections for students. The school area is Wi-Fi enabled. Every day in the morning students express innovative ideas and host flags of MST and La Via Campesina in the school. 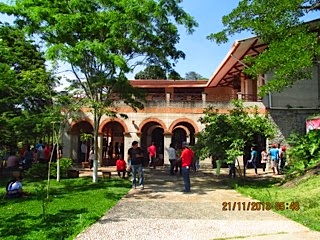 So what they do in the MST school? They give political training on a variety of subjects. Some of them are:
1)   Political theory. Four national courses lasting 40 days each every year, with two of these courses devoted to train the future leaders of MST
2)   A course for leaders from social movements, conducted in three phases with each phase running 45 days
3)   An intensive course on systematic reading of Karl Marx in six phases, each phase being of 1 week duration
4)   A course similar to reading of Karl Marx but to study Florestan Fernandes who has written 60 books of classical political thoughts. This course is to prepare students to read his works.
5)   Latin American Studies is an international course. La Via Campesina - CLOCK (Latin American Coordination of Social Movements) and La Via Campesina ALBA- Net work of social movements in Latin America send their students for this course. There are three courses offered to these students under Latin American Studies.
i.                Training of Trainers course for political training. This is a 40 days course and by the end of the course students have to present a program for their movement. Around 60 students from the 16 countries are participating in this course.
ii.              Latin American Political Theory is the longest course of the school of 3 months duration.
iii.            Specialisation in Latin American Studies. This course is being conducted in partnership with the federal university of Juiz De Fora. This is a 2 year course conducted in 5 phases; the subjects of the course include philosophy, politics, economy, agrarian questions and organisational theories. One phase of the course is conducted in the national school in Sao paulo and the rest in the university.

Seminars, debates and meetings: People visit the MST school to attend seminars in various subjects. At least eight seminars are conducted every year on different topics including Latin American Studies. Apart from seminars, there are cycles of debates conducted every Saturday. The debates are open to all. Meetings on different subjects and new issues are also organised regularly in the school. Around 4100 people in 2012 and 3500 people in 2013 were benefited from the school by studying and participating in different programs.

The MST school is an idea of construction built during the process of the movement. All the volunteers stay in the school for a specific time of two to four years, do collective work with division of responsibilities. During the time my visit, Paula Djacira and Erivan were the political coordinators of the school and were collaborating with other friends and within the larger MST movement. The MST school does not get any support from the government and does not pay anybody. Teachers volunteer and students study and work in the school. Some food is grown in the campus with the rest supplied from various states of Brazil from MST. 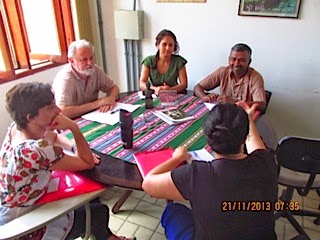 Paulo’s parting shot to me was that he hoped what was happening in the school would set the stage for the future of society. Indian peasants movements have no such school to systematically educate its cadres and leaders. I felt impressed by the equal participation of young women and men in the all the activities of the school from class room to kitchen. Another impressing thing which I felt in the school was that the schools contribution to Latin American studies which strengthens the (America Luccha) American struggle which demonstrated the collective struggle of Latin American people which is something not there in Asia needs to be explored.
Posted by SICCFM at 12:03 PM