La Via Campesina in defense of Right to Food in CFS.

Posted by SICCFM at 9:53 PM No comments:

Here is the text of  S.Kannaiyan who spoke on behalf of La via Campesina and civil society mechanism in defense of Right to Food and Public stock holding program of India in  the CFS plenary in FAO on 14th October, 2014.

Thank you madam chair and I take the floor representing

La Via Campesina which is an active member in the civil society mechanism here.
Civil Society endorses the stance that India has taken here today on the public stock holding issue. We, as civil society believe in the principle of coherence of human rights, which is enshrined in the UDHR. Human Rights are indivisible and inter-dependent.
We cannot have a right to adequate food in practice only by ensuring minimalistic entitlements and by negating the principle of policy coherence.
The complete hypocrisy of the developed countries particularly the US and the EU needs to be throughly exposed. Whilst protecting the interests of their farmers and agri-business, they are using the blatantly unjust WTO rules to arm-twist India and other developing countries.
Public stock holding is vital to the food and nutrition security of any country. It is one of the principal weapons that we have against food price volatility. A guaranteed minimum floor price mechanism can potentially help small and marginal farmers, especially women farmers. Any trade measure that comes in the way of countries assisting the poorest and most marginalised people is unacceptable to us.
We condemn the unfair trade rules that have permitted the developed countries to put most of their subsidies in the Green box, while developing countries are being squeezed to cut their subsidies.
We believe that there should be a full discussion on the public stock holding issue in CFS 42. We believe that the CFS is THE legitimate forum for the discussion on public stock-holding and food security issues and not the WTO.
The principle of coherence of human rights over-rides any trade negotiation or agreement that comes in the way of food security of our constituent groups.
Thank you.
Posted by SICCFM at 9:50 PM No comments:


Tax Justice Network ▪ Forum Syd Kenya ▪ GRAIN ▪ Anywaa Survival Organisation ▪ South Indian Coordination Committee of Farmers Movements
Media release
9 October 2014
For immediate release
Karuturi still going down
Dutch branch goes bankrupt, farm in Ethiopia sold off
Karuturi Global Ltd, the Indian multinational that made its name in the global cut flower industry and recently acquired more than 300,000 ha in Ethiopia to produce food for foreign markets, is continuing its painful and massive decline. On 30 September 2014, its flower trading subsidiary in the Netherlands was declared bankrupt, while a Dutch industry source reports that one of its farms in Ethiopia has been sold to a company in Dubai.
Four years ago, CEO Sai Ramakrishna Karuturi boasted, "Personally, I believe that in five years or in ten years time I would like to be seen and compared with peers such as Cargill or the Archer Daniels of the world or the Bunges of the world, who are all well known, well reputed agricultural companies."1
Now, with much of Karuturi's overseas operations shut down, seized by creditors or sold off, these ambitious plans appear all but dead.
Initial woes
Karuturi produced roses in India, Kenya and Ethiopia and was planning to expand its nascent food production operations from Ethiopia to numerous other African states.2 But the company struggled to get its expansive farm operations in Ethiopia's Gambella region off the ground and its flower businesses got into trouble. The company's stock price plummeted from a high of 38.15 rupees in October 2010 to 5.00 rupees at the beginning of 2012 to around 1.30 rupees where it sits today.
Meanwhile, the company was on the hook for millions of dollars in unpaid taxes and debts. In 2012, the Kenya Revenue Authority determined that Karuturi, which had once been producing close to a million roses a year at its Naivasha farm for an eager European market, failed to pay US$20 million worth of taxes due to transfer mispricing.3 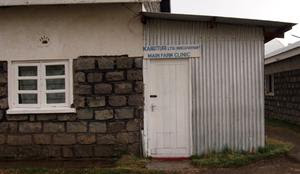 Not doing so well. (Photo: GRAIN)
In 2013, the company was taken to court in Kenya for failure to pay its creditors.4 Unpaid workers went on strike, the Karuturi Hospital suffered power cuts, and free schooling for the flower farmworkers' children at Karuturi School came to an end. The community around the farm in Naivasha continues to bear the economic and social costs of the Indian company's troubles.5

In early 2014, the Kenyan courts finally determined that Karuturi Ltd was bankrupt and put the flower farm in receivership, despite protests from Karuturi.
Latest news
We have just learned that Karuturi's Dutch affiliate, Karuturi BV, has now been declared bankrupt by the court of Haarlem.6
The Dutch unit was responsible for receiving the flower shipments flown in daily from Karuturi's farms in Ethiopia and Kenya, and trading them through Flora-Holland. The flower shipments apparently stopped in May of this year.7 Karuturi BV left a debt of EUR 230,000, of which EUR 130,000 are taxes owed to the Dutch government.8
We have also learned that Karuturi sold its Ethiopian Meadows Plc flower farm to a company in Dubai. Another of its Ethiopian flower farmers, Surya Blossoms Plc, was almost sold in June but remains in Karuturi's hands for now.
In the midst of this turmoil, Karuturi has taken the unusual step of postponing its 2014 Annual General Meeting until December, claiming to the Indian authorities that it cannot produce its annual accounts because the receivers running the farm in Kenya have withheld necessary financial information.9 In late September 2014, Karuturi also made its three most recent annual financial reports and various legal statements pertaining to its legal, tax and labour disputes in Kenya unavailable from its website. Normally, listed public companies like Karuturi are obliged to fully disclose their finances.
Clearly concerned about its image, Karuturi also filed a defamation case against an Indian journalist who wrote a report for Inter Press Service about the company, demanding US$16.4 million in compensation. This move has been strongly denounced by the International Federation of Journalists and its affiliate the Indian Journalists Union as “harassment”.10
Where do things stand?
Now that Karuturi has seemingly lost control of its operations in Kenya, the Netherlands and Ethiopia, there is not much left for the company to hold onto, except some small operations in India – and a whole lot of debt. What went wrong? It's hard to tell. But the change has been spectacular. In Kenya, the flower farm they took over went from peak productivity to financial haemorrhage in a matter of years. In Ethiopia, the hugely controversial land deals, presented as a way for Karuturi “to make a significant contribution to alleviate the global and African food crisis," didn't feed anyone. In Europe, the firm was once responsible for about 1 out of 10 roses that consumers took home. All of this has gone south.
Staye tuned as perhaps a final chapter in the decline of this once significant company plays itself out.
For more information
Ms Mukami Kowino, Forum Syd Kenya, Nairobi
mukami.kowino@forumsyd.org
+254722436802
Mr Devlin Kuyek, GRAIN, Montreal
devlin@grain.org
+15145717702
Mr Nyikaw Ochalla, Anywaa Survival Organisation, London
ochalla@hotmail.com
+447939389796
Mr S. Kannaiyan, South Indian Coordination Committee of Farmers Movements, India
sukannaiyan69@gmail.com
Dr Attiya Waris, Law School, University of Nairobi
attiya@uonbi.ac.ke

Posted by SICCFM at 9:29 PM No comments: