Farmers’ movements are inviting all citizens, social organisations and people’s movements of India to hold protests all over the country on the 24th of October 2019, against the Regional Comprehensive Economic Partnership (RCEP) Free Trade Agreement.

The Indian government is negotiating RCEP with 15 other countries including ASEAN countries along with large industrial economies like China, Japan, South Korea, Australia and New Zealand. The RCEP is a great threat to our food and farm sector, and the negotiations are reportedly coming to a close by the beginning of November 2019.
Here are some reasons why we are calling on our state and national governments to take agriculture out the RCEP and all other Free Trade Agreements:-
With 11 of these countries, India already has significant trade deficit and this is only projected to increase with the signing of RCEP.
Indian farmers cannot be subjected to one more free trade deal that is not protective of their interests and pits them against significant subsidies elsewhere. We need to collectively resist and stop RCEP from moving further, and to ensure that agriculture - including the dairy sector and plantation products - is taken out of RCEP. We need to activate our respective state governments to intervene immediately, and get them to write to the Union Government.
It is not just farmers who are facing an existential crisis here – the nation’s food sovereignty is at stake here. We need to protect ourselves by keeping agriculture out of the purview of all free trade agreements and we certainly need to stop RCEP.
A background note on RCEP, a letter that you can submit as a memorandum to your state government and to the Minister of Commerce are downloadable here.
Please let us know if you plan to do an action and where, at this email address of Indian Coordination Committee of Farmers’ Movements:- secretariaticcfm@gmail.com
Download the Call to Action poster, doc. 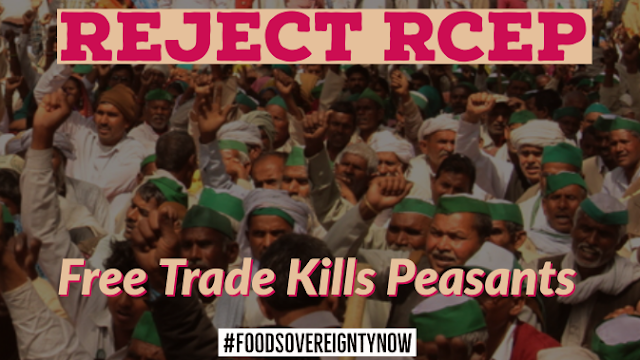